New study by the viral team at CBP in collaboration with groups in Japan, Canada and South Korea

Interkingdom competition occurs between hymenopteran parasitoids and insect viruses sharing the same insect hosts. It has been assumed that parasitoid larvae die with the death of the infected host or as result of competition for host resources. Here we describe a gene family, parasitoid killing factor (pkf), that encodes proteins toxic to parasitoids of the Microgastrinae group and determines parasitism success. Pkfs are found in several entomopathogenic DNA virus families and in some lepidopteran genomes. We provide evidence of equivalent and specific toxicity against endoparasites for PKFs found in entomopoxvirus, ascovirus, baculovirus, and Lepidoptera through a mechanism that elicits apoptosis in the cells of susceptible parasitoids. This highlights the evolutionary arms race between parasitoids, viruses, and their insect hosts 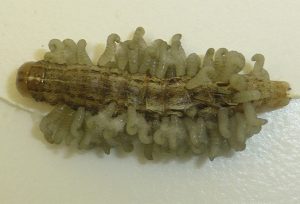 Larvae of the parasitoid emerging from a lepidopteran caterpillar after completing its life cycle inside the caterpillar. Courtesy of Dr. Vincent Hervet, AAFC Morden Research and Development Centre.

You can access to the full version of the manuscript here

A reprint can be downloaded from here